I thought this was just Webb reporting from the future again till I followed the links and saw that THEY ACTUALLY EXIST. See also: Domestic robots and the Furby phenomenon. #link

"One of my fellow archaeologists in Qatar has been playing as an archaeologist in WoW. Apparently the in-game play action of archaeology is incredibly tedious, which is perhaps appropriate. He says that people complain on the special WoW archaeology chat channel about it, and he tells them, 'this is what I do in my real life too!'" [c/o delicious.com/bldgblog]. #link

Looking back over the last two weeks, I find two prevailing themes: reviewing the past, and predicting the future.

The past I’ve already alluded to in my first Blogfodder link dump. Some of those links are nearly eight years old, which is forever in internet time. It’s incredible that so many of them are still accessible. (Yet maybe I shouldn’t be so surprised, as there’s many a site from even further back that hasn’t yet shuffled off this digital coil.)

As for the future? Last night I watched Bob Roberts again for the first time in years, and I’ll be damned if it isn’t prophetic: its parallels to the current social and political climate in America are franky scary.

END_OF_DOCUMENT_TOKEN_TO_BE_REPLACED

This is just the beginning! It's only a matter of time before the fabric of the space-time continuum unravels itself. #link

Yes There Are Grocery Stores in Detroit

Combatting the media's perception of the Motor City as a blight-ridden hellhole with no redeeming qualities. Indeed, there's better grocery shopping in Detroit than in the whole of Dublin FFS. #link

Take on the WWE's resident statistician (and greatest ring announcer of all time) in a test of wrestling geekiness. #link

A manifesto for the simple scribe - my 25 commandments for journalists

Some of these can be taken with a pinch of salt -- shallow, facile, glib and slick aren't insults now? -- but the first point is the most important: if you're not writing for a reader, you're not being a journalist. #link

The cartographers of cinema

From an otherwise unremarkable interview with the Coen brothers in the Guardian last week on release of their latest, True Grit, there’s this:

It is their 14th to date, and the latest instalment in what appears to be a concerted effort to cover the length and breadth of America with Coen brothers movies. Maybe because their preoccupations seem so resolutely antiheroic, or because their ambitions fit so snugly within their love of genre, the scale of this project was hard to spot at first. While everyone else was lost in hyperspace, the Coens have been quietly wallpapering their homeland. They’ve covered New York in the 1950s (The Hudsucker Proxy), Los Angeles in the 1940s (Barton Fink), Mississippi in the 1930s (Oh Brother, Where Art Thou?) and 1990s (The Ladykillers), Texas in the 1980s twice (Blood Simple and No Country for Old Men), Minnesota in the 1960s (A Serious Man) and 1990s (Fargo), not to mention Arizona, Washington, North Dakota, Santa Rosa and now, for good measure, Arkansas in the 1880s. A few more like this – covering Ohio in the 1970s, say, or Wyoming in the 1900s – and their work will be complete: nothing less than a patchwork quilt of America.

Five Emotions Invented By The Internet

That third one? That's me, that is. #link

These are awesome. #link

"The Noun Project collects, organizes and adds to the highly recognizable symbols that form the world's visual language, so we may share them in a fun and meaningful way." See also: Iconic, "a minimal set of icons consisting of 136 marks in raster, vector and font formats -- free for public use." #link

One of the animated shorts from last summer's IADT end-of-year show that I didn't get to see at the time; it's like mixed-media Pixar. #link

Set Up and Get to Know Your New Camera

Saved for future reference; having not yet explored any of my camera's manual settings after 2+ years, I think this will come in handy. #link

Set Up and Get to Know Your New Mac

US-centric as always, but lots of great stuff to discover here. #link

The ‘Blogfodder’ folder in my bookmarks is a bit of a catch-all location for any interesting links I find and might want to explore later in more detail. That was the intention, anyway — over the years it’s completely outgrown my ability to keep up with it, resulting in a whole mess of links left unfollowed and unblogged.

But they say you shouldn’t keep anything for more than seven years without finding a use for it. My first Blogfodder links have passed that deadline, so now’s the time to wrangle out some usefulness before they rot away completely. Best to begin at the beginning and see what caught my attention way back in 2003…

END_OF_DOCUMENT_TOKEN_TO_BE_REPLACED

Some of these are a bit silly, others quite surprising. It's part of a project tasked with reinvigorating the city centre (I hope they've noted the obvious points: blight in many parts creates a bad impression; and shopping/socialising options in the suburbs have improved, keeping people closer to home). #link

How to define a place when there's no consensus on its boundaries. #link

A history of Blunt Records

Dublin-based '90s indie label once part-owned by the dude from Therapy?; never heard any of this stuff at the time. #link

Saving this here with the best of intentions, but I'll probably never get around to listening. #link

One year in one image

Amazing how the atmosphere in a place can change so much depending on the time of year. But then, reality is all about the lighting [c/o Interconnected]. See also: The Slow-Photography Movement -- What is the point of taking pictures? #link

"I like this, but I fear it may be unworkable (how to provide proof of purchase, for one; and there's so many deleted titles that will never be digitised). #link

Why you should never, ever use two spaces after a period

The two-spaces thing infuriates me. Who taught people to do that? Never happened to me. #link

"Love Advice for Extraterrestrials, from the redoubtable but unquestionably masculine (in an extraterrestrial sort of way) Xortar Cheemchim, as published in Ranflax Planet 9's most prominent women's magazine." #link

"Recently, going through my extensive personal archives I came across my first blog, which seems to have been written when I was in kindergarten. This would have been 1991, which makes me a true early adopter of the medium." This is brilliant stuff; just read it. #link

Staff and passengers alike critique the Network Direct scheme, which has done more harm than good to the city's bus services; the timetables are really just a joke at our expense now (it's a long thread; I've linked to the latest page). #link

How London buses are numbered

The 100 Greatest Movie Insults of All Time

It goes without saying that this is Not Safe For Work. #link

Materials for artists, designers and inventors. And they're surprisingly inexpensive. #link

UK-centric, but the tips apply anywhere. Considering a weekend out west this year, somewhere nice and dark at night. #link

Ireland’s Economic Crisis: What sort of hole are we in and how do we get out?

A smart overview of the fine mess they've got us into. But -- and it's a big but -- it fails to factor in the cost of living (and a rising one at that). One can't honestly compare Ireland's taxation regime with those of other European states without also comparing the cost of day-to-day basics like groceries, public transport, etc which are by all accounts much lower on the continent. #link

Everybody and their dog has already linked to this, but anyway. I get what Patton Oswalt is saying (I feel his dismay at his treasured obscuria being co-opted by the mainstream) but for me, the age of Everything That Ever Was -- Available Forever is a dream come true. #link

Wikipedia entry on the bootstrap paradox

Following a discussion with Bee on the Terminator paradox, which to me isn't so much a paradox as a difference in philosophical argument. My position? "Kyle Reese always goes back." #link

Exactly what the title says. #link

These exist now? For the same price as a laptop? We really are in the future (hoverboards aside). #link

Top 10 Ways to Access Blocked Stuff on The Web

A Mexican, a Kiwi and a Nigerian walk into a bar...

Two things from this: every country has jokes about other countries; and the vast majority of said jokes are interchangable. The lack of uniqueness is surprising. #link

For ordering stuff that US sites won't ship overseas. Has anybody used this one? Testimonials, please! #link

More hardcore and related punk-type music than you can shake a stick at [c/o MetaFilter]. #link

I’ve been ploughing through The Creation Records Story over the past few days. By now I’m at the stage where my interest is trailing off – I can’t stand Oasis – but that’s only the last couple of hundred pages; the rest is essentially a survey of the British indie music scene of the 1980s, and Creation was right in the thick of it.

The label’s earlier days are the most interesting to me: 73 in 83, The Jesus and Mary Chain, the House of Love saga, and the infamous My Bloody Valentine – as much remembered for almost bankrupting their label as they are for breaking musical barriers.

END_OF_DOCUMENT_TOKEN_TO_BE_REPLACED 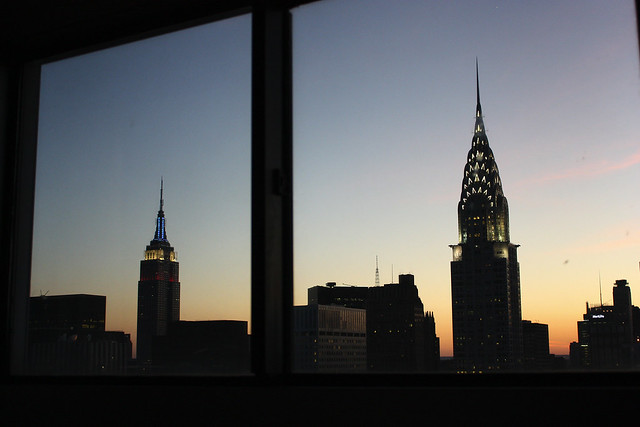 My intention was to keep a mini-journal of our six-day trip in New York last summer. I even bought one of those Moleskine city guides as the perfect notebook for my observations. Sadly the day-to-day busyness and exhaustion put paid to my plans. But I’ve still got that notebook for a return visit, and I’ve had the benefit of a few months to distill the experience into thoughts which are better off here than stuck in my head, unarticulated.

END_OF_DOCUMENT_TOKEN_TO_BE_REPLACED

Everything gets back to normal a little too quickly post-Xmas, don’t you think?

Little to report from Week 478. No big New Year’s Eve partying for us, just lunch at Nando’s and adding to our puppet collection. Seriously – The Puppet Company and Melissa & Doug come highly recommended.

Oh yeah, and we bought a telescope. Though we haven’t had much chance to use it yet, what with the cloud and the haze and all. When the worst of winter passes we should have more to see.