With Extreme Rules coming later tonight, it’s about time (after four weeks, I know) that I reflected on this year’s WrestleMania, which did not have the most auspicious of beginnings. Last time out I said I was “hopeful that some exciting TV” would come out of the post-Rumble mess on the road to the Showcase of the Immortals. Alas, the build-up was fairly weak, despite all the potential being there.

END_OF_DOCUMENT_TOKEN_TO_BE_REPLACED

Reporters versus subs - back to an old journalistic demarcation dispute

I get what Greenslade is saying but let's be clear: reporting and subediting are two very different skills, so 'swapping jobs' won't really achieve the results he desires. #link

Knowing there are people at universities doing actual creative writing degrees who write that badly make me feel pretty good about myself, y'know? It's not quite schadenfreude but I'm sure there's a German compound word for it. #link

Rex Sorgatz posits a middle ground between the old model of weekly episodic TV and all-in-one-go binge-watching: one episode released at the same time each day over a number of days. Like how mini-series used to work. #link

My Letterboxd review of Avengers: Age of Ultron

The embargo’s finally lifted so I can share with you all my surprising take on the second Avengers flick: it’s shite

Now calm down, I will be fair; there are some improvements on the first one, which I hated with a burning passion. The awful ‘witty’ dialogue has been toned down for the most part. The treatment of the characters is more sympathetic to their solo adventures, if not canon. The Hulk, written backwards from one of those oh-so-witty lines in the first film, is redrawn here as the classic tragic child-in-a-monster’s-body; Hawkeye is not the one from Matt Fraction’s superlative comic run, but at least gets a respectful role in the story.

END_OF_DOCUMENT_TOKEN_TO_BE_REPLACED

After all the anticipation, Mr Turner was a letdown:

A bravura performance by Timothy Spall this undoubtedly has, but as a film, Mike Leigh’s Mr Turner is a flawed masterpiece. As I see it there are two ways you can do biographical drama: identify a theme and use events of the subject’s life to illustrate that and tell a specific story (a la Milos Forman’s Amadeus), or simply retell the events of that life in succession. Leigh opts for the latter, and the result is like a diary flailing for a story, and missing out on the stuff we really care about when it comes to JMW Turner: the bloody art, like!

END_OF_DOCUMENT_TOKEN_TO_BE_REPLACED

My Letterboxd reviews of The DUFF, Big Hero 6, and Blade Runner

Reblogged from my Letterboxd list, my review of The DUFF:

The DUFF is a nice surprise: a film I fully expected to be awful, judging by the try-hard social media marketing campaign, and the ‘Hottie and the Nottie’ implications of its central conceit. But it’s actually a pretty funny, well-done contemporary take on those risque ’80s teen comedies we look back on with such fondness. Starting from a fairly crass premise, the film moves through a series of set-piece high-school cliches in lieu of a plot, but they’re cliches because they work, and there’s enough modern riffing and stereotype inversion to set it apart from straight pastiche. Plus there’s the versatile Mae Whitman (the voice of Katara in the fantastic Avatar animated series) in the lead as the so-called Designated Ugly Fat Friend of the title, gracefully walking that line between sensitivity and silly comedy, and who by all rights should be destined for better things.

END_OF_DOCUMENT_TOKEN_TO_BE_REPLACED

Explaining the Irish banking crisis, in typically Irish terms. It's still pisses me off that we've never really learned the lessons of what went down, and we're bound to repeat it again. No real sense of people pulling together, everyone out for themselves. The upcoming marriage referendum has brought it out again: such an absence of empathy in such a supposedly 'Christian' nation; personal 'conscience' as an excuse for denying others trumps all. As a people, we're a sham, we really are. #link

The word-hoard: Robert Macfarlane on rewilding our language of landscape

The travel writer on the disappearing lexicon that's specific to the landscape in Britain (and surely Ireland by extension). I did not know, for instance, that forest refers not only to the woods but an area reserved for hunting, regardless of its tree coverage. #link

Little to report over the previous few weeks that I haven’t already mentioned.

Press screenings have been thin on the ground for me lately due to scheduling conflicts. I did attend one this Friday morning, for the new Avengers movie, but we’re apparently embargoed till Tuesday, so yeah.

Music-wise, I’ve got another heavy stuff round-up in the works for Thumped, on top of a few other reviews. This past week I’ve been mostly listening to the new Bosse-de-Nage record, All Fours, which is the best thing I’ve heard in ages. That’s been at the expense of everything else, however, so I’ve got a fair amount to catch up on.

END_OF_DOCUMENT_TOKEN_TO_BE_REPLACED

The public consultation closes this Friday. I've gone for option two, which really has the best chance of being realised (option three is better, but a pipe dream in the current climate). #link

Millions spent but are our streets more cycling friendly?

I don't know where they're spending their millions because the answer is a resounding 'no'. Here's two simple things that would help immensely: educating motorists that cyclists are allowed to 'take the lane', especially when it's unsafe to keep left; and making sure road surfaces are free of debris and uneven surfaces (poor tarmac laying around shores is just one depressingly regular example, grand for cars but potentially lethal for cyclists). #link

Some genius has only gone and edited out everything from the Star Trek movie series bar the bits with starships moving, drifting, droning in space. #link

In The New Yorker, John McPhee reminds writers to put the reader first when choosing their references or turns of phrase. Context, yes? [c/o @burn_amb]. #link

How to back up a country

This is kinda crazy near-future sci-fi stuff, but it's happening, and I suppose it's appropriate that it's happening in Estonia, which to me has always represented a mix of technological emancipation and post-Soviet ennui. Or something like that. #link 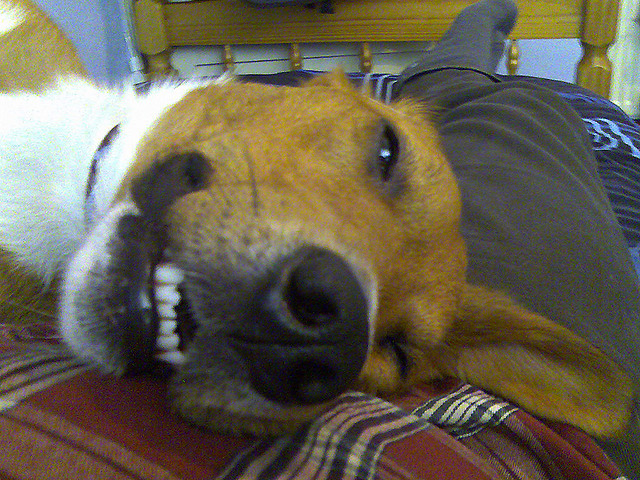 This is Jack, a few months after my mam adopted him from Dogs Aid in 2007.

His first owners must have lived locally; he ended up at the sanctuary after he was hit by a car and treated at the vet on Raheny Road. His hip was messed up but the vet did a great job, and though we knew he’d get arthritis when he was older it never really gave him much trouble.

They estimated he was about three years old then. He spent the next eight years in my family home, happy and loved. St Anne’s Park is just down the road and he had the run of the place. END_OF_DOCUMENT_TOKEN_TO_BE_REPLACED

Your Internet Friends Are Real: A Defense Of Online Intimacy

Or, a concise history of guitar amplification. #link

Fox Mulder and the Problem of the Romantic Conspiracy Theorist