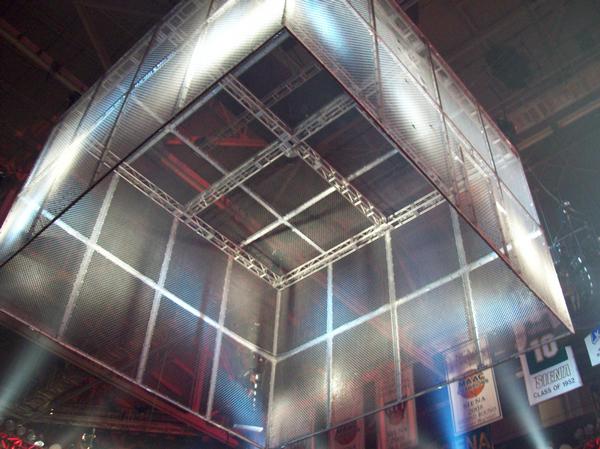 More than three months into the ‘New Era’ brand split and it’s a bit late now to give you a full-on essay on the whats and whys and wherefores. Suffice it to say it’s hard to call it a disappointment when the overall results are about as much as I expected. Does that mean they can’t do better? Of course not. But with the people WWE has in charge right this minute, change for the good is at best piecemeal, or accidental.

For every step forward WWE pretends to make, they have to take a few more backwards. The ‘brand extension’, an effort to shake up the company’s creative status quo, is just a throwback to something they did before but didn’t quite follow through, and history is repeating itself. That throwback-ness extends to the visual presentation, too: the new Raw and SmackDown (excuse me, SmackDown Live) graphics hark back to the early noughties incarnations of both shows, rivets and steel for the former and a big metal fist for the latter. I’m not quite sure how much nostalgia today’s fans have for that era, or indeed whether the comparisons with the contemporary product are all positive.

The deliberately unbalanced roster split — Raw got three talents for every two on SmackDown — hasn’t provided for a better Monday night show, that’s for sure. Raw is still bloated and boring stretched over three hours, thanks to a continued stress on the thin main-event level at the expense of a bustling and talented mid-card. (And I include the cruiserweights in that cohort.) Even skipping the ad breaks, those two hours and 15-odd minutes really drag.

For pure entertainment value, Raw is trounced most weeks by the shorter, snappier SmackDown helmed by former NXT head writer Ryan Ward, who really seems to get that WWE should be a variety show, with emphasis on the variety. It’s not that Raw doesn’t have its moments — the reinvention of Chris Jericho has been a joy, and there’s always Kevin freakin’ Owens — but they’re islands in an ocean of mediocrity, and it’s impossible to watch them without thinking how much better they’d be on the blue brand, where the heels are proper dicks (The Miz, AJ Styles) and the faces are worth rooting for (Dolph Ziggler, Heath Slater, even John Cena).

Some credit has to go to the WWE Network post-show Talking Smack for helping add that extra layer to SmackDown’s characters, making their stories resonate just that bit more with the viewer. Raw’s supposed to be getting its own version shortly, but that will only underline the aesthetic sameness between the two programmes, which still shared the same feckin’ stage set for the first few weeks of the split. Why not find a way to integrate those electric worked-shoot backstage interviews throughout the show, and give a sense of a live-wire improvised happening, as opposed to the overly scripted tedium they have now? Or is that asking too much?

Anyway, if Raw and SmackDown match up anywhere in terms of consistency, it’s on pay-per-view. After the stupendous letdown that was this year’s SummerSlam, the solo-brand shows thus far — SmackDown’s Backlash and No Mercy, and Raw’s Clash of Champions — have been more-or-less equally watchable. And if tonight’s Raw-branded special event keeps up that trend, by all rights it should make for an entertaining evening. The thing is, it’s Hell in a Cell, and the strictures of that theme are bound to get in the way.

This is where I put my fantasy booking hat on and say that, while we’re OK with using WCW names again, with Clash of Champions and all, the October PPV should really be Halloween Havoc. I mean, tomorrow is actually Hallowe’en! How perfect would that have been?! By all means have a Hell in a Cell match on the show if you must, but you’ll only need the one, as the theme won’t be such an albatross. Tonight’s show has three of the bastards, none of which have feuds hot enough to require containing within Satan’s Structure.

But I’ll get to those in a minute. The undercard is set to kick off with a mildly diverting cruiserweight six-man tag that underlines everything wrong with WWE’s presentation of the new division. After all the hoopla of the Cruiserweight Classic, WWE saw fit to throw together a random selection of its standouts (some of whom aren’t even actually signed to WWE contracts) on weekly TV with no angles, no characters, and few future prospects. They’re making the best of it — and come on, who doesn’t want to see Cedric Alexander and Rich Swann go at it one on one? But those purple ropes and lilac lights seem less and less a special production, and more a reminder to fans that they’re not really watching Raw. As for the match tonight? It’ll probably be fun but who gives a shit.

Bayley takes on Dana Brooke in singles action in what should be a decent match, at least it would be if we were watching them in NXT. But both women have been handled so poorly on the main roster — and especially Bayley, who Vince and Kevin Dunn just don’t get at all — that if we do get a good match here, it’ll be in spite of the set-up. The same goes for the Cruiserweight Championship match between champ TJ Perkins and scrappy challenger Brian Kendrick, whose gimmick is that he’s old (he’s only 37) and he’s got a family to feed (so, like Heath Slater, then). I haven’t been watching Raw recently (can you imagine why?) so I’ll be coming to this one with fresh eyes, and I’m giving it the benefit of the doubt.

Enzo and Cass versus Gallows and Anderson? These guys have one of the more entertaining feuds in Raw, but creative’s had trouble balancing the humour with the true grit both sides possess, and which made Enzo and Cass in particular a standout combo on NXT (it’s still a mistake in my book that they never had a run with the NXT tag belts). It’s got more potential than The New Day’s tag title defence, which is really about the challengers Cesaro and Sheamus, coming off their underwhelming best-of-seven series and whether they can work as a winning team.

Then we come to the triple main event, or ‘WWE pays lip service to women’s wrestling’. Even if Raw Women’s Champ Sasha Banks and Charlotte Flair do headline the show, as unlikely as that is, they’ll have to share billing with not one but two other men’s matches. Vince and Dunn really are incapable of letting women have this one, aren’t they? Even on a minor single-brand show, they couldn’t give them that much. It really makes one question how much pull Stephanie McMahon has with her father, or whether she’s as invested in the ‘women’s revolution’ as she claims to be. The match itself (I expect the kind you’d get in a standard ring, with the cage barely if at all coming into play) doesn’t matter here nearly as much as what it means in the bigger scheme of things, and what it means is that men can always reach the top alone, but women have to share the summit.

Do the other Cell matches even warrant that lofty status tonight? Not really. US Champ Roman Reigns and Rusev are fighting over a mid-card title in a feud that’s stubbornly refused to acknowledge fan sentiment, and the resulting atmosphere will be awkward at best. Kevin Owens and Seth Rollins have a better chance of making something from their night in the Cell, yet theirs is a proxy battle over The Authority’s control of the Universal Championship so it’ll probably be ruined by shenanigans.

It almost goes without saying that none of the three ‘main events’ will see blood drawn on purpose, or reach the level of intensity the giant cage used to promise, at one time, until Mankind went flying off the top and the concept went off the cliff with him. If I never again saw another Hell in a Cell match in WWE, tonight’s show notwithstanding, I can’t say I’d miss it.

You were reading Hell night: Hell in a Cell previewed, a blog entry by MacDara Conroy. It is filed under Wrestling and was published in October 2016. If you liked what you read here, you can follow this site on Twitter @MacDaraBlogs or via reader feed, and find many more entries in the Archive. You can also buy me a Ko-fi.