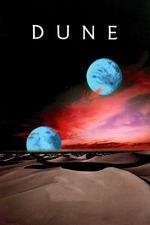 I’m surprised not to find a previous record of this one here, as I’m sure I’ve watched it within the last decade. But anyway, this was my first time with the Alan Smithee ‘extended cut’ and… yeah, I can see why David Lynch took his name off it. The extra hour adds nothing to improve the film, or make the story clearer. Indeed, with that hamfisted Frank Herbert voiceover intro it actively takes away from the theatrical cut’s unique ‘what the fuck is going on here’ quality. I don’t want to know about artificial intelligence or rebellions from generations before, I just want to be thrown head-first into its stately weirdness. It remains a triumph of production design, one of which everyone involved should be proud. How Lynch feels about it today is his prerogative, but it’s a shame there’s no love left there anymore.

You were reading Film review — Dune, a blog entry by MacDara Conroy. It is filed under Screen and was published in March 2019. If you liked what you read here, you can follow this site on Twitter @MacDaraBlogs or via reader feed, and find many more entries in the Archive. You can also buy me a Ko-fi.