Matt Webb: How would I improve RSS? Three ideas

We all know RSS was killed off by the double-whammy of Google shuttering Reader (for no real reason) and Facebook becoming the de facto walled garden for the majority of people online (finally realising the promise of AOL!). But it also never died. My blog has been consistently publishing a feed since the early days, although some backend SSL issues with my domain mean it’s not currently validating. But! You can subscribe to it just fine with NetNewsWire, which I’ve returned to after a few years with Feedly (which is also good, but it no longer recognises my feed, so…) and with which I’m rebuilding my ‘blogroll’. I’d also love the option to send newsletters from my Gmail inbox to NNW, but not enough to pay Feedbin $5 a month for it, sorry. #link

Thinking out loud about floating pools

If I may editorialise for a minute (because I did write up a news brief on the subject earlier today): there seems to be an element within Dublin City Council that’s obsessed with remaking the city into something it isn’t, rather than capitalising on and improving what it is. END_OF_DOCUMENT_TOKEN_TO_BE_REPLACED

On the dark side of SimCity: “Behind one of the most iconic computer games of all time is a theory of how cities die—one that has proven dangerously influential.” #link

And how the iconic ‘Marber grid’ was made. #link

A fantasy card-drawing game that’s best with two players, so worth adding here as a reminder. #link

The last time I made overnight oats, the texture was, well, off-puttingly glutinous. But if I do get the urge to try again, I might do it this way. #link

Maciej Cegłowski on ‘the siege of Carrie Lam’

“Carrie Lam is a Theresa May-like figure who seems to thrive on a performative stoicism, standing firm in the face of a self-inflicted crisis that a more capable politician would simply wiggle out of. She is a tragic figure in the same way that a pilot who points the nose of the aircraft at a mountain and refuses to listen to the passengers screaming for her to turn is a tragic figure. You puzzle over her motives while also wishing that someone, anyone, would throw her out of the plane.” Great analysis here on the protest the west has seemingly put behind it (because if the markets are untroubled…). #link

This kind of ‘reputation management’ is clearly awful but makes perfect sense, and reminds me of an article I read recently about what I believe was the US agricultural giant Cargill, and how it uses SEO tricks to keep its bad press buried on the web, but which I now cannot find (touché). #link

Bee shared this one with me, from 10 years ago: a quietly furious tale of prejudice where pride — in one’s self-appointed expertise (in this case, junk science about arson investigations), in one’s convictions (the failings of eyewitness testimony), whatever it may be — comes before truth and justice. #link

IndieWebify.Me: A guide to getting you on the IndieWeb

So, my site passes muster up to Level 2 here, pretty much (my h-card is ‘incomplete’ but I’m not adding my email address, sorry). I think I’ve done all I can for now, unless I need/can use Bridgy? #link

The Art Of Warez, a short documentary on ANSI art culture (with bonus Black Dice on the soundtrack). [c/o pete @ Thumped] #video

From Tokyo at Night, by Mateusz Urbanowicz, c/o the recent Kottke.org post on his Tokyo Storefronts. Prints are available, too, though I don’t see shipping info so YMMV. #image

Someone please remind me I was looking at/for this. #link

How can you tell that an Irish person’s successful? The media starts calling them British

“‘Britishness’ is, essentially, a slightly less nationalistic way for English people to declare how great England is, while deploying a meagre fig-leaf of imperial distance which, for some reason, they find more palatable. This allows the English to combine a heartfelt conviction of their own popularity, with a reflexive, toddler-like joy in grabbing things that don’t quite belong to them; and also enables their pesky habit of cheerily rendering ‘British’ anything else that isn’t nailed down, like countries, museum treasures and, latterly, Irish celebs.” Plenty more choice quotes where this came from. (Though we should probably like cricket more, especially considering how well we’re playing at Lord's right now.) #link

Phil’s choice is people working with wood. Lately mine has been Rescue and Restore; before that, videos from the driver’s seat of Japanese bullet trains. #link

How to Rescue Embedded Images From a DOCX File

Forty-plus years of Super Sentai tokusatsu covered in about eight minutes. Interesting to see how blatantly toy-oriented the Japanese shows are compared to the western adaptations. #video

Olly with an excellent breakdown of the philosophy behind antifascism, one that also serves as a takedown of the naivety of certain journalistic quarters in the face of racist rhetoric and manipulation. #video

An essay on the multi-million-dollar protein food industry. Which is pretty much like the gluten-free industry, or any other mass-market food fad. #link

Hummus is dead easy to make and I really should make some more often. (Same goes for chimichurri, though I’ve found it harder to get the flavour balance right.) #link

Sometimes all you need in your life is some baby capybaras. [c/o TKSST] #video

I could be from anywhere within a massive red blotch from Cavan to Wexford, which feels like the research on Hiberno-English could be more specific. #link

‘Sonic attack’ on US embassy in Havana could have been crickets, say scientists

I shouldn’t find this funny but I do. #link

I still have a bunch of Nat Geo maps from when I had a subscription that need to go up on a wall or something. #link

If there’s a moral to this story, it’s that these things can’t be forced. Imposing orthography from above? That’s been done before: Cyrillic, Korean, even modern Irish. But the nuts and bolts of communication are something else. How may people speak Esperanto, after all? #link

Noticing: The Best Kottke Posts of 2018

The Noticing newsletter is a welcome arrival in my inbox every week, and to close this year there’s a double-whammy best-of-2018 compendium (the B-sides are here). #link

For working out text size ratios for website display. #link

The Twitch streamers who spend years broadcasting to no one

Linked on a blog read by no-one. Oh, the irony! #link

The weight is over: kilogram redefined at ‘emotional’ conference

This must have been a heavy situation. Heavy, get it? #link

A longform debunking of nearly every contemporary food/health myth you’ve ever heard. #link 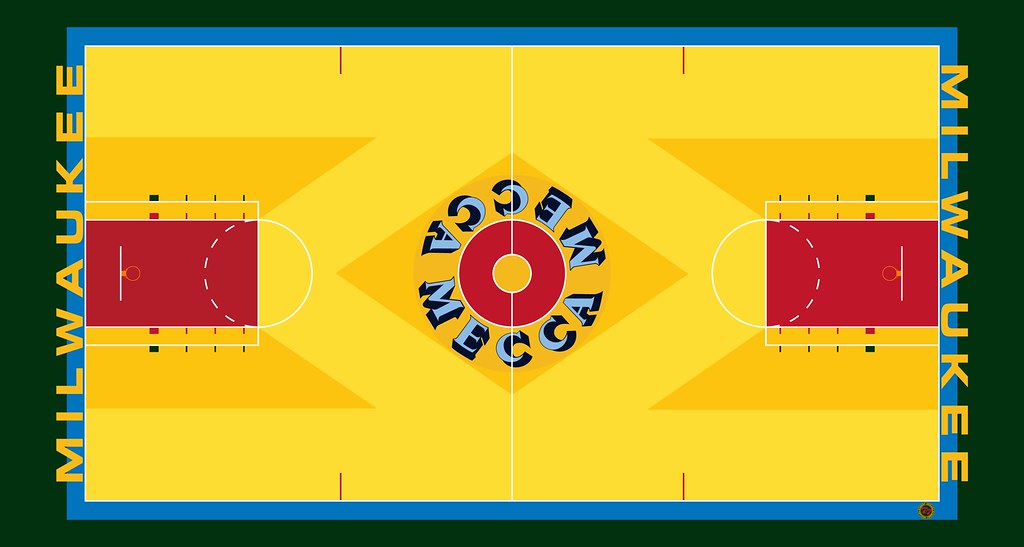 The Milwaukee Bucks design above, from the late 1970s, might be my favourite from this massive Flickr repository of NBA basketball courts through the years. [c/o Kottke] #image

Filing this for future reference, when I finally get to grips with JavaScript. Then I can understand potentially useful tools like Stimulus, ‘a modest JavaScript framework for the HTML you already have’. #link

The Long, Storied Controversy Over Cheese on Apple Pie

Neopets was run by Scientologists

Here’s an oldie by now in online terms. File under ‘WTF’. #link

Damn Interesting on ‘the curse of konzo’

The worst consequences of monoculture and monovorism (and of post-colonial proxy war). #link

The Networks at BoardGameGeek

A strategy card game in the world of TV for one or more players? That’s got ‘me’ all over it. #link

On facing yourself on the page: An interview with musician and author Viv Albertine

“Writing makes you not like yourself very much, I’m afraid. I think anyone would feel the same if they’d looked that deeply into themselves for a couple of years. I’m having to rebuild that now, my acceptance and liking of myself, because I’ve so examined myself from so many angles in such an unflattering way.” #link

Pop culture today is obsessed with the battle between good and evil. Traditional folktales never were. What changed?

“Good guy/bad guy narratives might not possess any moral sophistication, but they do promote social stability, and they’re useful for getting people to sign up for armies and fight in wars with other nations. Their values feel like morality, and the association with folklore and mythology lends them a patina of legitimacy, but still, they don’t arise from a moral vision. They are rooted instead in a political vision, which is why they don’t help us deliberate, or think more deeply about the meanings of our actions. Like the original Grimm stories, they’re a political tool designed to bind nations together.” [c/o LinkMachineGo] #link

OK, I’m interested. No idea where to start, mind. #link

Fields of Arle at BoardGameGeek

Bitcoin Is Ridiculous. Blockchain Is Dangerous

Paul Ford with the best summation of the cryptocurrency phenomenon I’ve yet read. Paul's right about a lot of things. Except this. #link

I wouldn’t go by their pronunciation guide (the language can be spoken with considerable difference depending on what part of the country you’re in) but this is a nice appreciation of Irish vocabulary. I wish I spoke Irish, but school ruined that for me, and I have no drive to learn it now. #link

Olly’s videos, like this one, are excellent stuff — and indeed represent Kant’s moral philosophy in praxis. #video

I’ve still got the basics down, but I could do with something like this as a refresher course. #link

For the maintenance of a cohesive visual identity. And I don't see why the principles couldn't apply to other media. #link

“A curated collection of useful CSS snippets you can understand in 30 seconds or less.” Yes please and thank you. There’s a similar project for JavaScript, too. And here’s some more lesser-known CSS quirks and advanced tips. #link

I’m a fair bit away from grokking this but here it goes for future reference. #link